One of my first memories is snorkeling as a child, I must have been perhaps six or seven years old. At ten I had done my first SCUBA dive and by thirteen I was a qualified openwater diver. This lead to summer jobs in dive centres where I would mop floors, clean gear and greet clients in return for free dives. By the time I was eighteen I was a divemaster and working full time in the dive industry. I am grateful to have had the chance to dive the island of Tenerife’s amazing dive sites, logging over 2000 dives since then, for almost two decades. Travel and sailing have also enabled me to dive the Red Sea where I was overwhelmed by a chance night encounter with a majestic Manta Ray, Australia’s Great Barrier Reef where on my first dive I was greeted by a White Tip Reef shark and the Caribbean. All of these places have been different, each area harbours a unique and different ecosystem, each a product of local currents, weather patterns and the effects of man,s mostly unwelcome, intervention.

The yacht I am working on is currently anchored in the South of France at Golfe Juan which sits slightly East of Cannes on the Cote d’Azur. On a rare day off the chance to dive came  up which I snapped up in an instant. I haven’t dived for a while for various reasons but was reassured by the familiar smell of neoprene and the hissing of high pressure air tanks venting. Setting up was second nature and before I knew it I was in the dive centres fast RIB speeding toward the La Formigue light (actually an isolated danger mark which indicates a large rock in the centre of Golfe Juan) where our dive would take place. 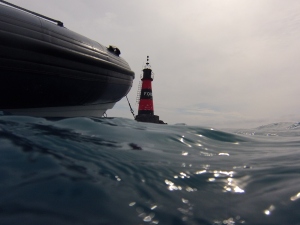 This was to be my first dive in the Mediterranean Sea and I was  little aprehensive about what to expect, mainly because I was aware of the sea’s reputation for overfishing and pollution. The Meditteranean’s 2.500.000 square km is bordered by around 132 million people and 3 continents (Europe, Asia and Africa). The area has been the crucible of civilization in the west since records began which also means that it is the most fished area historically in the world, ever since the Phoenecians started exploring many thousands of years ago. Today many costal areas still depend on ever dwindling fish stocks as a source of income, an income that is far from sustainable. The Meditteranean’s curse does not end there   as many rivers such as the Rhone meander through Europes industrial and agricultural heartland, ending their journey in the sea. They bring endless tonnes of agricultural waste sush as fertilizers and contaminated waters from the factories and populouses that hug their banks into ”The Med” each year. This problem is further aggravated by the fact that climate change is affecting the sea in an alarming rate due to it’s fairly shallow nature and the bottle neck at the Straits of Gibraltar, just 8 nautical miles wide, mean that it takes over 100 years for the sea’s waters to fully recycle. Scientists are using the Medittaranean as a prediction model for the planet’s other seas and oceans, with some alarming conclusions.      One of which is appearance of ‘dead zones’ where fertilizers have optimized conditions for algae and bacteria which sufficiently starve the surrounding water to a degree where fish and other marine life cannot survive. Complex food chains which range from the large apex predators such as sharks and the nearly wiped out tuna population to plankton are becoming increasingly stressed and are giving way to a state of ‘Brittlness’ which favours simpler food chains made up of jellyfish (hence the areas ever increasing jellyfish blooms to which I have been witness), invertabrates and algae. This sadly is what all our oceans face if drastic action is not taken to avoid it. Sadly, the effects in the Medittaranean may be too far gone.

The dive was at best an excercise in futility as the Medittaranean’s barren nature was painfully apparent. In a 45 minute dive ranging from 10 to 26m in depth I saw no fish over a few centimetres and no larger predators such as octopus, barracuda, groupers or similar fish. Small wrasse and damsel fish where all that where to be seen in what seemed to me a very stark and folorn seascape. This was made even worse when we came across a huge monofilament fishing net that had caught on rocks and been abandoned by it’s owners. Far too large for us to remove and potentially dangerous also as it could ensnare a careless diver all I could do was document it’s presence by camera as it lay there. How long would  it pray on unsuspecting fish and turtles? 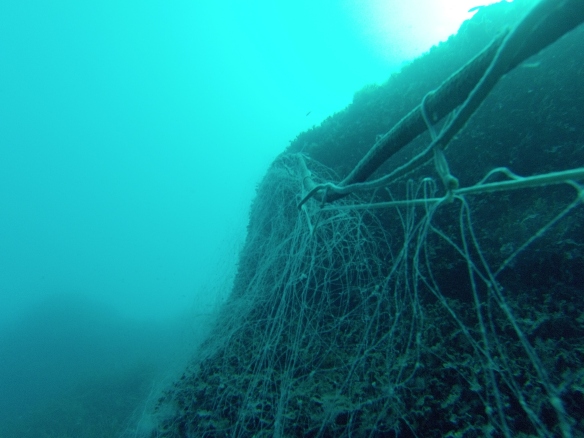 How long will thius net stay here on a never ending cycle of death?

I left the water with mixed feelings. I am always stoked to get in the water wheather it be surfing, diving, sailing, swimming but I had the bitter sweet taste to having witnessed first had the calamity that faces our oceans in the not too distant future, a painfull realization that has left a numbness in my mind. 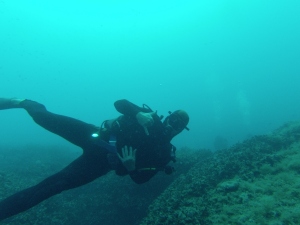 My first dive in a while….

I know I have been away for a couple of weeks….still finding my feet at my new job aboard the 80m superyacht. Lots to learn and take in, every day is a learning curve which is great. On a good note we went on a SUP session this saturday, no waves but a calm sea with crystal clear water was on hand for some fun….just happy to be in the ocean…well, actually this is the Med so maybe ‘sea’ is the correct term.

Sadly, our seas and oceans are not well. In fact, the Mediterranean is very polluted due to the large populations that border her and the limited tides due to the narrow straits of Gibraltar mean that pollution stagnates and grows. All our Oceans are sick, even on beaches hundreds of miles from major land masses are suffering…. as the video below will show…..

I am not an idealist, I am aware that if we want to live as we do there will always be some collateral. After spending 5 years working for the Red Cross I have learnt that it just isn’t possible to have a perfect world. That does not mean that we shouldn’t do everything in our power to protect out planet. Let’s face it, even if we all did everything we could we would still be contaminating.

But there are some things that are just wrong, acts that defy belief and ones that go un-punished. One of this is Japan’s continuous ”Research” expeditions to hunt whales. International agreements allow them to fulfill a quota every year under the banner of ”research”. Funnily enough the meat is then sold and consumed, isn’t that ironic? If this where some developing nation the world would be up in arms but as it is a wealthy country it is all ignored except for the few countries who do face up.

Sea Shepherd do amazing work, often at great personal risk. If you get chance to support them then do so.